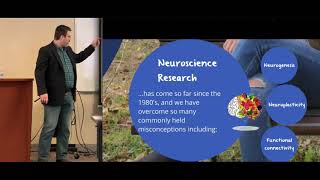 What's The Brain Got to Do with It

Dr. Novian gave this presentation as a CEU at the San Antonio Association of Relational Therapists (SAART) on Tuesday, February 12, 2019. Dr. Novian explains how he approaches therapy and defines his NeuroIntegrative Approach as it pertains to relationships and communication. While this talk was intended for counselors, therapists, social workers and others in the mental health field, the information is applicable to anyone who wants to improve communication skills and self

With Valentine's Day only hours away, I wanted to share an activity that my wife and I do on a regular basis. We have found that there are certain questions that help us connect and open up the possibility for deeper conversation about where our relationship stands today, how we have succeeded in the past, and where we could still benefit from some work. This video contains 14 questions to discuss with your loved one. The first video is very short, and walks you through all

December 9, 2014 Dr. Allen Novian The holidays always seem to be filled with more expectations than excitement, which can bring out the worst in us at times. Finding hope, joy and peace is an expectation of most of us at Christmastime, but actually finding any of those things can sometimes be a hard nut to crack. Between remembering those who have passed, looking at the chaos of the stores and streets, juggling the Christmas parties, recitals, school events, and untangling

By Brianne Lutterman, MA, NCC, LPC-Intern Supervised by Dr. Allen Novian, PhD, LMFT, LPC-S Hello, My name is Brianne Lutterman, and I am new to Novian Counseling & Neuroeducation, but I am certainly glad to be here. I wanted to take a look at relationships, and communicating with friends and family about your marriage in a negative way. While I recognize the benefit that venting to friends has in the moment, the aftermath is not always so great. When you vent to close friend

By Dr. Allen Novian Update: We are so proud of Brianne for becoming a FULLY LICENSED LPC!!! She has moved on to other career opportunities upon receiving her license, and we wish her all the best in her future as a Licensed Professional Counselor. While Brianne is no longer with iCNS, we look forward to bringing in new LPC-Interns to offer counseling, neurofeedback, and biofeedback services in the near future. Original Post: We are SO excited to be welcoming a new member of

By Dr. Allen Novian Stage 6: Develop Genuine Neutrality Hopefully, in the process of forgiveness, you will come to resolve any negative emotions and thoughts about yourself and the other person or organization. To do so requires that you do not expect or demand any payment or restitution after forgiveness. You must assume that there is no debt to you. Mother Teresa once said, “It is between God and myself, it was never between me and them anyway.” This must be practiced

By Dr. Allen Novian on September 28, 2011 Stage 4: Stop Punishing one of the common behaviors of people is to try to punish those who have harmed us. Most studies have shown that punishment rarely teaches anything other than to resent the person doing the punishing! Some of the ways you may punish are by withholding companionship, giving someone the silent treatment, or even giving compliments but then taking it back with an insult. You may try to go further with legal act

By Dr. Allen Novian Stage 3: Submit to a feeling of Vulnerability The next stage in forgiveness is to open yourself to change and dissonance. You cannot spread butter when it is hard and cold. Forgiveness does not come easily when your ideas, thoughts of revenge or justice are hardened. You must retreat and re-examine your approach. Just like a pound of butter, if you want to forgive and heal, you need to let your ideas thaw and be molded into a new perspective, combined w

Moving from Anger and Resentment to Compassion and Love Much has been written about forgiveness. Everywhere you turn people are saying you have to forgive, yet few people likely understand the process of true forgiving. For true healing, forgiveness is essential. The same holds true for the idea of compassion. Yet I have learned that going from anger straight to compassion does not bring about true forgiveness. It only creates a sense of pseudo forgiveness. Many people try to

By Dr. Allen Novian There are always reasons to take a new direction in life, whether it be the clothes you wear, the job you do, the treatment choices you make, or the relationship you are in. Looking outside the box can be scary and more than a little nerve wracking, but sometimes, it is the best choice.In relationships, there comes a time when a change is needed by one or both people. The question then, becomes, “Do we change together, or separately?” Often, when trust has

An Exercise in Gratitude

Building and Maintaining Trust in Relationships

By Dr. Allen Novian Is trust, or the lack of it, affecting your relationship? Because your partner has been “burned” in a previous relationship, is he or she now finding it difficult to trust you? Has infidelity in your relationship made it hard for you and your partner to trust each other? If so, you are not alone. When couples are asked to describe a situation that causes distress in their relationship, the topic of trust frequently arises. They lament, “I can’t trust him w

When the Honeymoon is over

By Dr. Allen Novian Have you ever heard someone say, “The honeymoon is over,”? When problems crop up in a relationship or marriage, they are like parasitic weeds. At the beginning, they can be small. They are so small, in fact, that they might not even be noticed as problems by either spouse. For example, if Sharon goes out late every Friday night to rub elbows with her coworkers, Alex may at first praise her driven and outgoing nature, and he makes plans with her on a differ

C's of the Marrried Relationship Part 4

By Dr. Allen Novian The final C is Compassion. Acting out of compassion for your spouse and yourself in all things is vital to maintaining a healthy marriage. All too often in relationship, compassion is replaced by selfishness, jealously, and resentment. Compassion involves a continuous desire for your spouse to be happy, to prosper, and to grow in love. This desire is demonstrated in what you think and, more importantly, in what you say to and about your spouse. The most im

C's of the Married Relationship Part 3

By Dr. Allen Novian How do we communicate when we can’t stop arguing? Most people look at communication as getting a point across. I instead begin to teach them how to communicate by teaching them to listen to each other and then to voice back to their spouse what they just said before they give their side. This is why I have couples listen to me and repeat to me what I said before they begin to communicate to each other. Communication with me is usually less emotional so it

C's of the Married Relationship Part 2

By Dr. Allen Novian Communication issues are probably the most common reason that couples come to see me for therapy. Couples will often tell me “we just can’t seem to communicate about anything”, or “we are constantly arguing”, or “he/she just doesn’t understand me”. They might say we use to get along but now everything we say to each other ends up in a fight. So this is how couples come into my office, after being unable to communicate for usually a long time they are frust

C's of the Married Relationship Part 1

By Dr. Allen Novian Couples come into my office with many complaints, but usually their problems boil down to at least one of three core issues. These issues can be summed up in the “3 C’s of Relationship,” comprised of Commitment, Communication, and Compassion. Commitment issues include not only emotional and physical affairs but also anything that becomes a priority over the relationship. The one I see most often is the couple who over the years has allowed their commitment

Marriage Begins and Ends with a Promise